was the motto of the NAG 20 years anniversary event  2013

The hall of the Reformed Church in Horgen was totally filled. The audience followed the diverse presentations in honour of the 20th anniversary of a nepali home for street children: the “Home of new Hopes”(NAG=Nawa Asha Griha”) This original private initiative of Nicole Thakuri Wick a (then 23 year old ) Swiss woman is today a remarkable organisation. Claude Nicollier, the famous Swiss astronaut also honoured the event as did Andrè Lüthi CEO from Globetrotter.

Dr.Romedius Alber, foundation president and paediatrician led the event through the 20 years ..a long time in the ever quickening present day ! Dr. Alber presented the audience with a photographic display from the past. Andrè Lüthy (in manager look) then looked more like a Taliban and Nicole with her first 6 street-children looked like their older sister! Also present was Wangel one of the first 6 boys (now a Nepali business man)

Nicole grew up in Horgen and instead of continuing studies in Zurich she decided to help street-children in Nepal. This was 20 years ago. She married Jeeten Thakuri and became a mother, and her private life was lived within the Home. Today she offers over 200 children a roof over their heads, food, clothing and education. Also they receive medical treatment and according to their talent, the chance of further studies outside the home. In addition, the school bus collects another 150 children from the slums daily to attend the school where they also receive school uniforms, books, and a nourishing meal. This is vital for many as they rarely (if at all) receive a decent meal! To help integration in the local community NAG supports another 350 local children attending the state school, as state education is not free.

The NAGers as they are called, contributed their own input to the celebrations in the form of a totally self-made video, presented by Nicole. It showed the obligatory morning singing of the national anthem followed by children during studies, eating, washing dishes and doing various home duties. Also included were the free time activities such as sports, games, art, pottery, music ect. In addition we saw the “soup kitchen” group who regularly cook and distribute food to the present street-children of Kmd.

There were interviews of previous NAG ers, who now are teaching in NAG. One is dreaming of himself opening a school in his village. (Nicole’s comment “he might even manage it… he’s stubborn enough”) We saw Sapena the first NAG medical doctor who graduated in the top 6 in Bangladesh and is absolving her practice year in Kathmandu. She is not the first NAG girl who has been able to study others choosing different fields.

Nicole is totally committed to her goal, irrespective of the continuing political chaos, which rules in this small poor but beautiful country. Due to disputes with various Nepali home owners, who had other plans for the buildings, she had to move the entire home with all children, furniture ect 4 times! The last time the foundation (and thanks to a generous donor) were able to purchase a small deserted pashmina factory which has become a delightful home and haven for NAG.
Nicole has also mastered her private problems. She lost her son (6 mths) with SIDS, her husband (36yrs)

Closing the film commentary Nicole gave thanks on behalf of all the NAG children “for helping their dreams to come true” With this the motto of the event “When Dreams come true” was illustrated.

Wangel one of the NAG lucky ones who’s dream also came true also travelled to Zurich. Foundation member Philipp Inauen interviewed him as he told his story. How he had to feed the family when his mother died and later, after graduating from NAG and marrying, was able to open his own grocery business with his mother-in-law. He now delivers to various monasteries and schools (including NAG) and is able to support his wife and 9 yr. son. He concluded saying “without NAG this would not have been possible and I thank you from my heart”

From the beginning Nicole was supported by her family in Switzerland. In 1993 as she rented a small room, sleeping on the floor until beds were made. Her mother Judith, who as an Australian was naturally charitable, mobilised her circle of friends and family for support. Today she is an important contact for interested donors and the many sponsors of NAG children. She is also Nicole’s most important link to Switzerland, especially as her father Niklaus died in 2011 shortly before he became ill; he installed the first private earthquake warning System in Nepal…in NAG.

Andre Lüthy , who’s travel groups sometimes include old clothes and other articles in their luggage for Nepal, knows NAG and Nicole since many years . His opening words were based on a saying from Josephine Baker “Who wants their dreams to come true… must wake up” Nicole had a dream…. to make it possible for these children to have a future with a job and family! She made this dream reality, despite her difficult personal problems! All this far from the PR furore.. She doesn’t want to stand in the limelight. She even refused an invitation from Kurt Aeschbacher.

Nicole you woke up!! We can learn from you. Many people talk about their dreams; however it’s important what one DOES!

Following Andre Luthi the world recognised Astrophysiker and NASA pilot Claude Nicollier’s speech was combined with two points. On one hand he is also one if the few people who’ s dream came true and Nicole, always fascinated with space and Nicollier, dreamt of personally meeting him one day! He explained his space experience illustrating it with fascinating pictures of space and our earth.

Home in Tokha/Khatmandu Nicole sits at her computer like a “cockpit” of a plane! Over internet, communication is now possible without telephoning and also the social medium of Facebook is a daily tool.

The Home is superbly run. Nicole organises, controls and decides. The children protect each other, the older ones caring for the younger. NAG is like a small village. In the evenings the living-room is usually filled with children, various activities and games taking place.

Dr Frederic Perrier (vice-president of the foundation) came especially from Paris for the event. “Without him and my mother I wouldn’t have been able to make it” said Nicole and presented them with wooden honour frames from Nepal. Dr Perrier visits Nepal often and well knows the situation there. In his opinion there is no better project existing in the country! 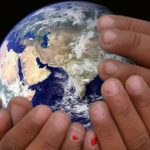 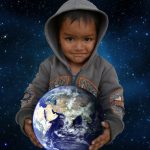 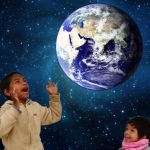 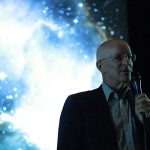 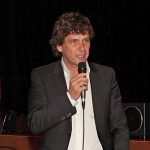 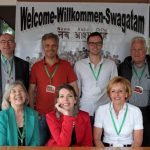 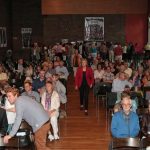